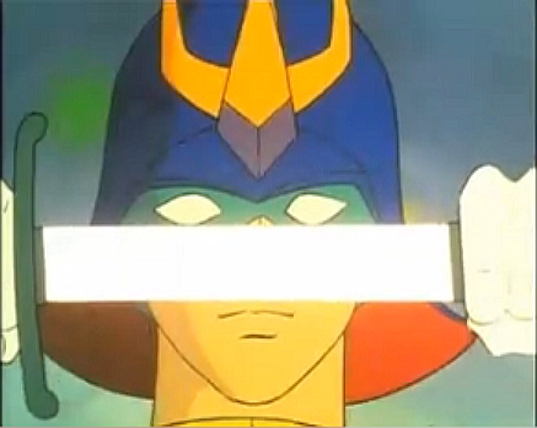 During a round of watching YouTube videos for hours on end one night, I found this one video where the cast of characters looked eerily familiar. Now, you’ve probably heard the story of how Mobile Suit Gundam got to where it is today (Reader: “About 9,000 times”). When Gundam aired in 1979, it was canceled and cut short of it’s promised near 50 episode run.

Let’s say that the characters are real actors and they struggled to find jobs to pay the bills after the series ended… They needed any job they could find (not any kind of job… *cough*). Well, the show you’re about to see could have been the show where Char, Amuro, and Sayla were reunited-and had to speak a different language.

The show is called Space Black Knight. It’s a complete ripoff of Mobile Suit Gundam. According to “legend”, it’s a Korean made animation series made in the same era as Gundam. Instead of using mobile suits, elements from American cartoons are incorporated in the show…

But let’s pretend that Space Black Knight never happened. For now, we’ll cringe at seeing how the original cast of MSG did outside the show as if it were a wacky, predictable sitcom.

Instead of importing Mobile Suit Gundam directly and localizing it for Korean audiences, they decided to create their own show from scratch using the same characters (read: bootleg). This was common during the 70’s and 80’s as the South Korean government banned imports of Japanese entertainment from entering the country (back when Japanese/Korean relations were tense). Thus creating this “copied” version, removing all the good stuff.

On the bright side, sales of the original Gundam series (in the correct country) encouraged more Gundam series to be made, so everybody got their jobs back, except for a few characters in ZZ Gundam.