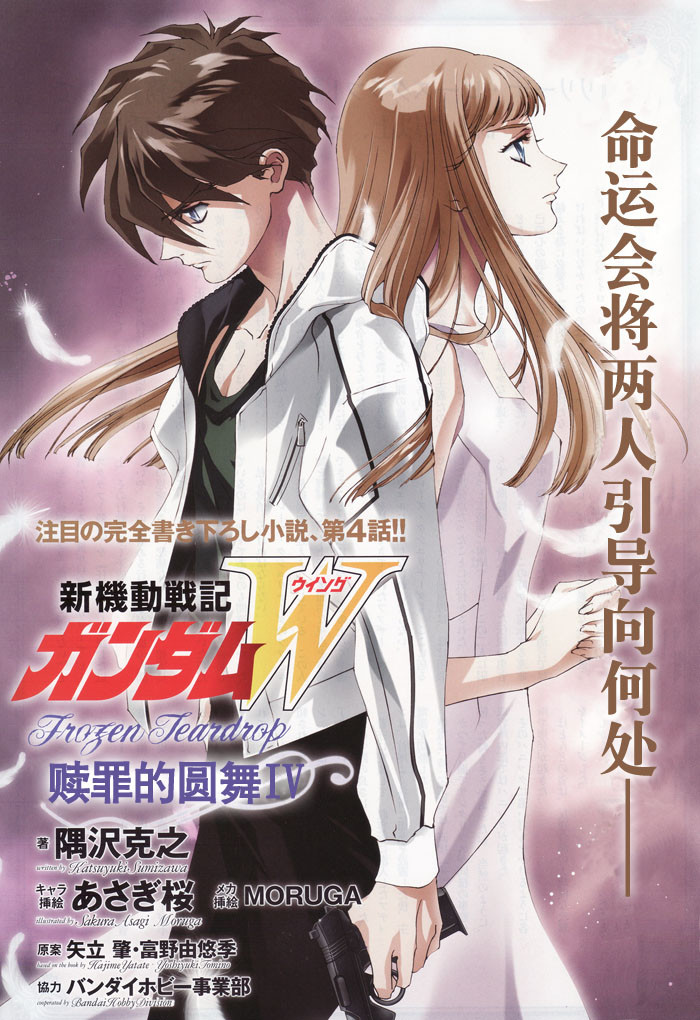 This post was originally published in June 2013. In honor of 2020 being the 25th anniversary of Gundam Wing, here is the republication of my review of the novel sequel to Gundam Wing, Frozen Teardrop.

Important: since it’s been so long since I read what was translated in the novels, I made a slight error that was pointed out by a commenter on the previous blog. I still have the comment somewhere in the massive MySQL file that I managed to save, but it’s buried in my to-do list of other things I got caught up in. Please feel free to (constructively, politely, please) correct me in the meantime!

Apart from the Gundam Wing TV series in terms of side stories: with Blind Target, Ground Zero, and Battlefield of Pacifists—and The Last Outpost that features a lone soldier not directly related to the five Gundam pilots—you didn’t miss anything… Before 2010. How would you react if I told you that Gundam Wing is back? As in officially? Cannon? And that it takes place after Endless Waltz? The only catch is that it has yet to be adapted into an anime or manga format.

Mobile Suit Gundam Wing: Frozen Teardrop is a novelization of the events following the original TV series, and the OVA and movie versions of Endless Waltz, from the writer of Wing, Katsuyuki Sumizawa. Frozen Teardrop was originally announced in 2010 in Gundam Ace magazine. It was huge news for those who have kept up with any kind of Gundam news, such as myself. However, there are too few people who know that this continuation exists. At least until it gets an anime adaptation… And if it’s worthy of such a thing.

Frozen Teardrop takes place approximately 20 years after the conclusion of Endless Waltz, where we see the five Gundam pilots Heero, Duo, Trowa, Quatre, and Wufei, for the final time as their Gundams are destroyed, never to be used again. The pilots were last seen as “Preventers”, a group who extinguish wars between Earth and the colonies before they start—or so that’s how it goes (off-topic: it can be confusing after keeping up with the Universal Century timeline for so long, despite being introduced to Wing as my first Gundam series). In the two decades following Endless Waltz, civilians have found life on Mars in addition to living on Earth and the colonies (which was very briefly mentioned in Endless Waltz). Even undesirable characters are plotting to produce some sort of mobile weapon to take over the planet.

From the first chapter, it begins with the introduction of Kathy Po, the daughter of Sally Po from the Preventers (in which her whereabouts are unknown at this point), who is traveling to the Preventers base at the North Pole, where two important people wait for her. One of them is Chang Wufei, along with Duo Maxwell. However, they are known to Kathy as Master Chang and Father Maxwell before the truth is revealed. Being well over their teens, it’s hard to tell if they have changed in appearance, according to the cover illustrations (which is done by Wing’s character designer, Shukou Marase!) in future chapters. Heero Yuy is also reintroduced—as he sleeps in stasis… As in frozen in time. This is the second important person Kathy meets due to the recent turn of events.

While Frozen Teardrop explains the why and the how of the present (Mars Century) era, the novel details events from the past that lead up to the events of the Gundam Wing anime, such as the early life of Treize Khushrenada, immigration from Earth to Mars, and the story of the young colony leader Heero Yuy (the inspiration of the pilot Heero we know today). So far, these stories are explained in three arcs: The Treize Files, MC (Mars Century) Files, and Peacecraft Files.

The Treize File stories details the life of Treize from birth. The arc introduces his parents, as well as his brother (that has never, ever been mentioned in the TV series), Van Khushrenada. Reading this sheds light on why Treize acts the way he does; not as a bad guy, but the fact that he puts too much thought into his plans, as if he were a poet (which irritated me watching this for the first time on Toonami… I thought it was just being too young to understand). It’s also tragic, which is probably not surprising since this is Gundam we’re talking about. But by this not being a Universal Century story, it makes you appreciate the After Colony timeline as much as the Universal Century.

The Mars Century story is narrated by each Gundam pilot, new and seasoned, beginning with Katrine Oud Winner, “sister” of Quatre Raberba Winner, the same age as he once was as a pilot. In later chapters, Trowa Phobos is introduced; another “Nanashi” (No Name) that the Gundam pilot Trowa Barton (who now calls himself by his real name, Triton Bloom) once referred to himself as. The follow-up chapters continue with a narration by Duo Maxwell, which has been my favorite of the novel. Not only does it explain Duo’s detailed whereabouts since Endless Waltz–with surprising outcomes—involving bounty hunters–it further explains the history of the Mars Century’s twenty year history. And by twenty MC years, it’s probably at least 30 years in Terran (Earth) time. The Mars Century calendar was created differently from Earth’s AD and space’s After Colony calendars, in which one (1) Mars year equals two years on an After Colony. This arc also introduces Warlock and Snow White: mobile suits of Father Maxwell’s son, Duo Maxwell II, and the thawed Heero Yuy, respectively.

In later chapters following the Peacecraft Files, the Mars Century arc continues with the re-introduction of Trowa Barton and Quatre, who now call themselves Doktor T and Professor W, and their involvement in the development of the new mobile suits. Between these chapters, the Peacecraft Files chronicles the events of colony activist Heero Yuy and Relena’s mother, Katrina, and her twin sister, Sabrina, dating back to AC 145. The arc further introduces Doctor J, the soon-to-be developer of Wing Gundam, and another mobile suit which is described as the “Wyvern”.

From what’s been explained so far of Frozen Teardrop, it appears to be only character development. Not to disappoint, the earlier chapters include an intense mobile suit battle involving Zechs Merquise and Wufei, who now goes by Master Chang, in “modern” versions of their respective Epyon and Altron (Nataku) Gundams. Reading the chapter, I found the description of the battle hard to keep up with… probably because it’s in text–and keeping in mind that this is a fan translation.

With that said, it’s a debate as to how Frozen Teardrop will translate to the screen to see the battle in better detail. And in which format it would be best suited in: TV, Movie, or OVA. Considering the fact that the series that started the Gundam franchise, Mobile Suit Gundam, got sequels spanning over 100 episodes, it shouldn’t be a problem bringing Frozen Teardrop to TV, or at least in OVA format like Mobile Suit Gundam: The Origin. But I do have an issue with the way the story is being told, since it’s split into different points in time; that it would interrupt the main Mars Century story. Wouldn’t it be wise to adapt the spinoffs—Ground Zero and Blind Target, preferably—into an OVA series before starting a new TV project for Gundam Wing? Then again, there are a few manga from the UC era that haven’t been made into an anime (Char’s Deleted Affair), and even novels (Hathaway’s Flash).

Frozen Teardrop concluded in 2015. At the time of published this post, I had exhausted the available chapter translations on inchoate-oeuvre’s LiveJournal*, and there’s more that has not been translated (the translator has not updated the Table of Contents since early 2012), which includes a side story of the Gundam pilots as Preventers.

(*Note: I don’t normally post links to fan translations or fan subs, but I am giving this an exception for the time being until it is licensed in North America. Please support the official release when available!)