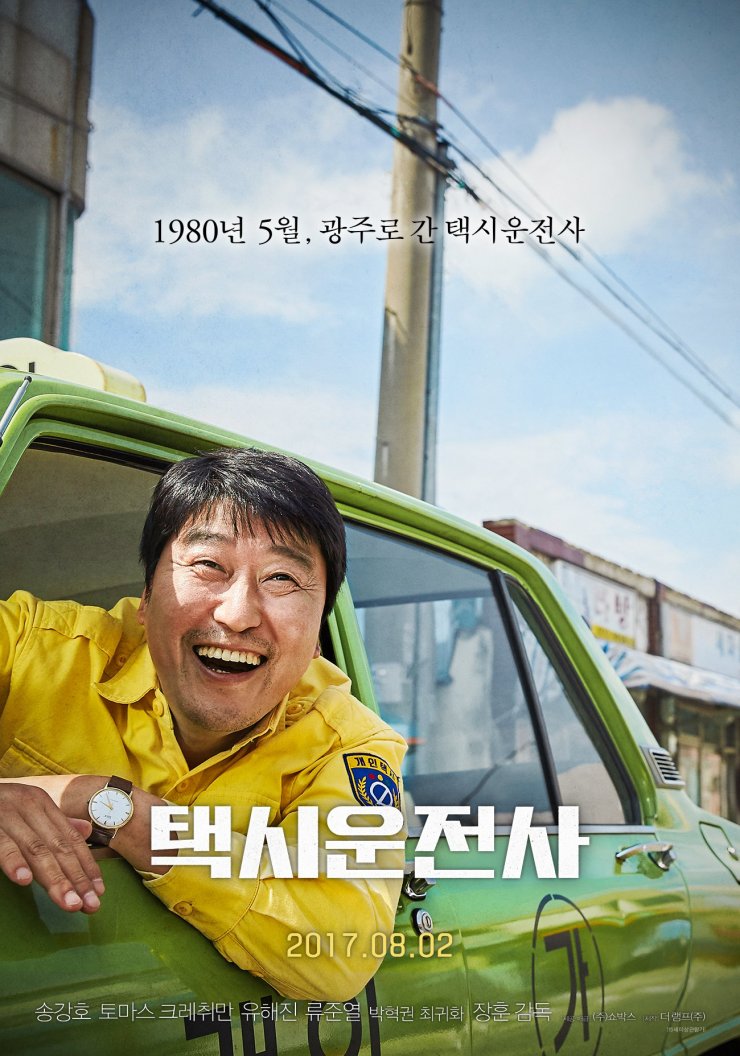 South Korea is often considered to be the epicenter of “cool”, from their films, to their food, to of course their music. Before Korea’s modern renaissance however, South Korea was not just affected by civil war but also internal strife as a series of dictators imposed authoritarian rule. Park Chung-hee, who served as President until his assassination in 1979, was one such autocratic figure. Following his death Chun Doo-hwan took over, and then implemented martial law and began to violently quell student protests in Gwangju.

It is in this tumultuous time that “A Taxi Driver” sets its scene. Our eyes into this world are through Kim Man-seob, an ordinary taxi driver who’s just trying to scrape by. Played by Song Kang-ho, the venerable everyman of Korean film, Man-seob starts the film blissfully unaware of the events in his country. Even more so he openly scoffs at the student protests when he comes across one on his taxi route in Seoul. However when West German reporter Jürgen “Peter” Hinzpeter needs a taxi to Gwangju, hiding his true intentions to report the uprising, Man-seob takes his fare and thus becomes a part of the conflict from which he can no longer hide.

Based loosely on true events, “A Taxi Driver” does a nice job of balancing truth and near-truth to deliver a gripping story of a government’s suppression of its own citizens and their inspiring fight against injustice. Kim Sa-Bok, the actual name of the Taxi Driver, really did help reporter Hinzpeter during the Gwangju Uprising. Unlike the film version though, where Kim Man-seob’s character fills in as eyes for the audience, the real Sa-Bok was much more aware of the politics at hand. Likewise a few scenes are tweaked or inserted for melodrama, including a car chase that, however moving, still smacks of “insert action film scene here”. Pleasantly the message of the film is not overly tainted by these additional plays for audience attention. Instead they cushion the more authentic scenes of the uprising itself, which compares more accurately to the real life footage Hinzpeter captured during the Gwangju Uprising.

Viewing historical moments such as these through the lens of the country’s own eyes is always an interesting exercise. Many films play up historical moments of grandeur in a country’s past, as America’s often does with WWII films. Traumatic events in particular are often overshadowed or erased, as I suspect China will never release a film on the Tiananmen Square massacre anytime soon. In this case, “A Taxi Driver” is an attempt to actually shine some light on South Korea’s government’s past transgressions. As reflective of Korea’s more democratic mindset presently, “A Taxi Driver” raises up the common people, the students, the everyday protesters, while villying the brutal dictator’s military might. As a fan of historical films, including many no doubt with agendas and those without, this was refreshingly honest.

Overall if you’re looking for a documentary approach to these events then this is not the film for you. However if you came in like me knowing little to nothing about these events, but the idea of learning a little about Korea’s modern history appeals to you, then do check out this moving film.