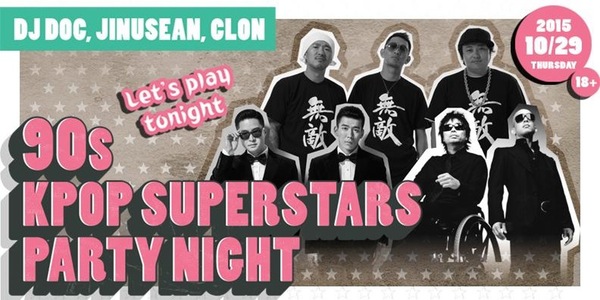 On October 29th, 2015, Star1 Entertainment held the 90s KPOP Superstars Concert in the Atlanta area at the Wild Bill’s Nightclub in Duluth, GA, which was a surprise treat (pun somewhat intended, because two days Halloween) for K-Pop fans who live in the Southeast, especially in Atlanta. A concert of this kind was also interesting as the K-Pop acts who perform in the US are current mainstream artists such as BTS, BLACKPINK, and NCT.

The concert featured well known K-Pop and Hip-Hop groups of the 90s: Clon, Jinusean, and DJ DOC. Anyone who has been into K-Pop for 10 years or more may recognize some of these artists such as Jinusean. But for someone as myself, being into K-Pop for over 15 years, my interest was set on the old school rap duo from YG Entertainment, as well as DJ DOC. However, the group Clon was new to me.

There were many older fans at the concert who witnessed to see the performing lineup  during their rise to stardom in their respective eras. There were several modern K-Pop fans in the audience, so the feeling of being out of place was not too bad. A few of the curious long-time fans asked if I knew anything about any of the groups performing. Hilariously, another current-gen Korean Music fan approached us and joked that he didn’t feel left out.

I took as many pictures as I could at the time as I was simply impressed by fully witnessing the first generation Korean Music artists!

This was my first time witnessing Clon’s performance live, although I have never sought to listen to their songs until after the concert. This group was the most anticipated with the audience, especially with the introduction of Kang Won Rae, who made his way to the stage in a wheelchair. Kang Won Rae was involved in a very serious motorcycle accident during the height of their career that left him paralyzed from the waist down. Avid fans of Clon shed tears, and even took selfies facing the stage with their friends.

Jinusean was next to perform, in which they opened with their 2015 comeback song, “Tell Me One More Time“. They also performed their past hits such as “Phone Number” and their debut song “Tell Me” that featured Uhm Jung Hwa back in 1997.

My favorite performances of the night were from DJ DOC, a group I personally anticipated as they were my first old school K-Pop group I grew into years later as I expanded my K-Pop tastes. They opened with their 2010 comeback song “I’m That Kind of Person“, and performed “Run to You” among several hit other songs.