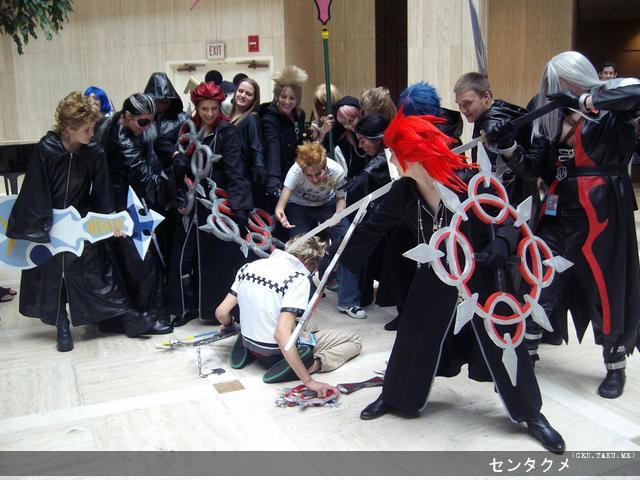 The following is a republication of a recap of my first Anime Weekend Atlanta in attendance! It was originally published following the convention in 2009. Since we’re in a situation where there are no cons to attend, unless virtually, in 2020, I figured this would be a good opportunity to wipe the dust off some of these posts, and with a little editing of typos here and there.

A LOT has changed since then, which also brings up a reminder that there are things that once were acceptable, which is now viewed with caution; I am not going to bring it to attention now, but you may figure it out as you read along, especially if you’ve been keeping up with the anime industry in the US in 2019.

After a small delay, my ride and I left for Atlanta a little after 12 PM, and arrived close to 3:00 PM. That gave us enough time to unload and for me to change into my Toshirou Hitsugaya (School Uniform) costume. As per my post on my personal Twitter account, I was hoping to get there before the Bleach Photoshoot at 3:30 PM, but that didn’t work out well… Saturday and Sunday morning were the only opportunities for this.

I roamed around the Cobb Galleria to check out the sights of Anime Weekend Atlanta for the first time after many failed attempts to attend in the past. The first place I made it to was of course, the Dealers Room. I spent less than I expected (at least for Friday).

I didn’t get a lot of Cosplay photos for Friday, but I’m sure it will pick up on Saturday! I did get a photo or two of the Atlanta skyline. Throughout the week, the region was threatened by thunderstorms. While we experienced some overcast, it cleared up later in the day-along with high humidity, making it the hottest day of the convention (from a Cosplayer’s experience).

I got to hang out with ProdigalNick of Boogie BAM Anime Jam Scenic City Anime & More for most of the afternoon and again later in the evening to check out the popular Totally Lame Anime panel. Totally Lame Anime is all about faults in many obscure Anime series (usually made in the mid-70s). The errors include missing mustaches, glasses, and storytelling that simply doesn’t make any sense!

A lot of the series highlighted at the panel were found in some VHS Bargain bins back in the day from the panel host Neil Nadelman. I do not remember what the series exactly were, but it’s something that Funimation, Bandai, or ADV Films (now known as Sentai Filmworks) will never, ever license.

The panel ran for 2 hours, but the second hour ran into another panel that I really had to see. It was almost 9 PM: it’s time for the 30th Anniversary Gundam Panel! The panel opened with a familiar shot of one of my favorite characters from the original Mobile Suit Gundam, Bright Noa.

The panel lasted a couple of hours, which was really worth it. The panel hosts were Drew Sutton and Richard Hoelsher of the Akihabara Renditions podcast. They covered the Gundam series from the original Gundam to Gundam 00… which is something like I did in the past for BBAMAJAM! The attendees at the panel were awesome; G Gundam and Gundam Wing are the best shows ever made, in the fans (and my personal) opinion. Even Gundam SEED and Destiny were bashed.

After the Gundam panel ended, it was time to check in one last panel for the night-which is a first for me in attending it so late in the evening (at 11 PM). Let’s say it’s not for everyone, and that a few things were “for sale” that would be hard to find at an everyday store convention. The same thing goes for what they showed at the panel. To simply put: there should have been a sign that says “Tentacle Crossing”. Let’s move on…

Saturday started on an annoying note. On my way to participate in the Bleach shoot (wear my Captain’s uniform), I had a little trouble finding the main location: the Fountains. If it were to rain, the backup location were to be at the elevators. Being new to the Galleria, this wasn’t an easy task.

While looking for the fountains, a con attendee informed me that it started raining… on to the elevators! I waited at the elevators with other Bleach cosplayers until the shoot started. When it did, the “Bleachers” walked all the way to the front of the ballroom of the Galleria for the shoot.

After the shoot was over, I decided to head on back to the Dealers Room to find something that I may have missed. I was right: I found a Dealer that sold Shitajiki for a reasonable price (compared to paying 5% more at other cons).

I purchased 2 Gundam 00, 1 Fullmetal Alchemist, and 1 Death Note pencil boards. Also in the room, I found a wooden replica of Hitsugaya’s Hyorinmaru (something I was looking for prior to the con having to settle with a plain ninja sword instead). After finishing my purchase, I took more photos of wandering cosplayers!

Around 3:00 PM, I decided to check out the Classic Mecha panel, hosted once again by the guys of Akihabara Renditions. It was a crash course for those who are interested in checking out other mecha series created before and during the wake of Gundam’s popularity. Before the panel came to an end, we were greeted once again with the screenshot of Bright slapping Amuro from the Gundam movies. ^_^

After Catlin wrapped up her panel, Vic entered the room and was greeted by many of his fans. He began by going over the topics discussed at his panel Friday (which was after the Opening Ceremonies and I didn’t make it to the con until 3 PM). Interacting with fans, he walked down each aisle of the ballroom answering questions.

Recommended Reading:   #PoorSportsmanship: Weeaboo Stories, or: "How NOT to be an Otaku"

After answering a few more questions, Vic showed a trailer of a Star Trek short he directed, and even stars in as a Klingon. But it wasn’t shown until at the end of the panel as there were a few technical problems with the computer. However, Vic had a surprise for everyone in the audience: a showing of Fullmetal Fantasy! (Keeping Vic’s promise, I decided not to take pictures nor videos of the film).

When Vic’s panel was over, it was time for the Costume Contest in the same room, but I had to pass it up for another event that was to happen in a couple of hours. I originally intended on checking out the Peelander Z and Omodaka concert, but another panel that took place at the same sounded very interesting: Yaoi After Dark.

The panel was supposed to start at 9:00, but due to certain circumstances, it started at 10. After an extra hour of waiting, we were able to get in. Like the other “panel” that took place on Friday, this also should have had a “Tentacle Crossing” sign. However, this panel was epic-er than last night’s panel-and it’s the first time in my Otakudom that I felt like a true fangirl.

Sunday… the final day for Anime Weekend Atlanta 15. I usually find Sunday at a con depressing as it means there’s no more convention until the next year. It actually ended on a high note. There were a couple of things I wanted to do before heading to the last Bleach photoshoot. I had thought the shoot was to be held at 10 AM, but remembered Saturday that it was to be 1 PM, unless I heard wrong…

Waiting for the shoot, I ran into a new friend I met on Facebook prior to the convention. It was a Yoruichi cosplayer who was also looking for the Bleach shoot. The both of us walked around between the Ballroom and the elevators until we asked another Bleacher whether or not it was happening. He also assumed it was at 1 PM, but wasn’t quite sure. We decided to give up on the shoot and waited in line for autographs.

The Yoruichi stood in line for Troy Baker (Abel in Trinity Blood), while I stood in line for Vic Migongna. After waiting almost 2 hours in Vic’s line, I got the chance to meet Edward Elric once again since Anime Central 2005.

Upon meeting him, I asked “Do you remember me?” Vic’s response: “You look vaguely familiar”. It was a shock being almost 5 years ago since the last time we’ve met. It was probably a silly question to ask, having 11,000 fans (according to the Risembool Rangers), but I’m sure I wasn’t the only one to ask. 😀

In the end, Anime Weekend Atlanta was the best convention I’ve attended in 7 years since going to Anime Reactor in 2003, my first Anime convention. Perhaps waiting this long to attend was well worth it.

There were a few things I wish I could have done, such as attending more Voice Actor panels. This year, I did not get the chance to meet Catlin, Troy and Samantha up close. The only Japanese Guest of Honor for 2009, Yasuhiro Imagawa: the director of G Gundam and Shin Mazinger Shogeki! Z-Hen, was unable to attend this year. I was a little put off by the scheduling problems, such as the timing of the Yaoi panel with the Peelander Z/Omodaka concert. The founder of AWA, Jason Merrill, was aware of the problems and promises it will be better next year. (Although it is a problem all conventions go through, so this routine for a lot of people.)

There were a few controversies this year, such as a longtime AWA Lum cosplayer being escorted out of the convention center by Galleria Security (and not AWA Security, who are aware of their very own dress code). My personal complaints include the lack of knowledge of Galleria landmarks by Centre Security, like the Fountains I had trouble finding Saturday morning-which I know now for next year. (It’s their property, after all. I mean, what if someone breaks into a car near the fountains?) Lastly, there were the problems with the elevators, which was talked about on the AWA Forums back then; I was not on the elevator at the time, but it’s the fact that I had to use the stairs 70% of the con…