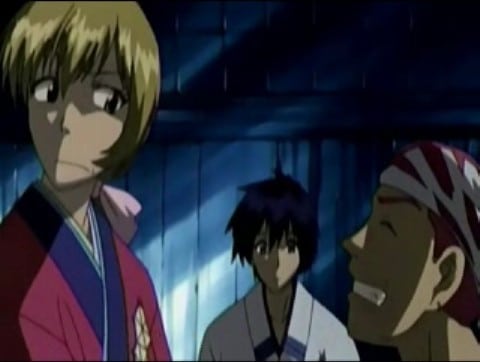 I attempted to watch the Samurai Deeper Kyo anime from Studio Deen many years ago as it was recommended to me in turn of having enjoyed what I watched of Rurouni Kenshin. I even wrote an informal post about it after watching the first few episodes during the early days of Centaku Media back in 2008. I’m bringing that very post back to highlight that this show exists, and perhaps I will finally get around to watching it one of these days.

Kyoshiro and Yuya arrive in a village who are afraid of visitors in the wake of the reemergence of Demon Eyes Kyo. Along the way, they meet Benitora, a recent recruit of the Sansaishuu clan. He reminds me of the tall haired guy from Kenshin. (Although it’s not Sanosuke–but that guy that Sanosuke called a Chicken somewhere in the middle if the series!)

After hearing word of strangers in town, the villagers–including Shiro, a bad guy/demon surround the shrine…

Speaking of Ruroni Kenshin, this show reminds me of it. Wow..I really need to finish Rurouni Kenshin. Why didn’t Cartoon Network air it again, especially since my VCR at the time bailed out on me?! (I know, my age is showing…)

There’s always DVD, if I can afford the remaining boxsets. Back to SDK…this is another interesting series. It’s no Rurouni Kenshin, but hopefully the remainder of the series can get me fired up to buy Rurouni Kenshin.

Winners of the 2020 Crunchyroll Anime Awards