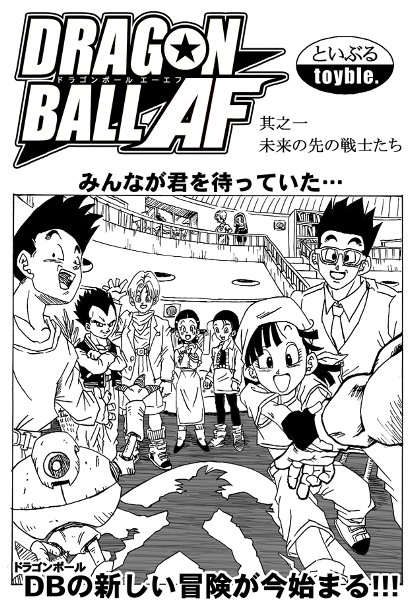 It started as a collection of altered images using existing characters from Dragonball Z or original fanart of the characters, turning them into something totally different. For example: Super Saiyan 4 Son Gohan or Super Saiyan 5 (yes… 5) Broly… or any combination of forms of a character from your imagination.

The story of Dragonball AF, where the “AF” can mean either “After Freeza” or “After Future”, or even “April Fools”, takes place after Dragonball GT. While the story is not official, there is actually a fan-made (non-cannon, of course) doujinshi that brings Dragonball AF to life. In 2007, doujin artist Toyble created the Dragonball AF doujinshi.

Even though this is a fan-made story, the following texts will contain spoilers for those who are interested in reading DAF, or Dragonball as a whole. ^^

During a normal day at Orange High Academy, Gohan, who is now a professor at the school (Chi-Chi’s wish is fulfilled!), teaches in the same class Goten is in. When a breaking news story of a robbery is announced on the intercom, Gohan pushes Goten to put a stop to it by transforming into Great Saiyaman #3. Great Saiyaman #3 arrives at the scene, only to find Papayaman (aka Uub) thwarting the robbers’ plans. 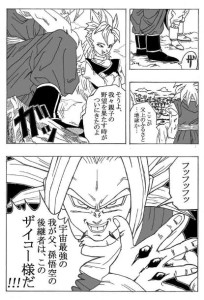 Disgusted, Goten flies back home (since the school day will have ended by the time he returned to class). On the way, he is greeted by a mysterious presence who calls himself Xicor (he looks a little like Broly, but without the complaining and with cool looking horns coming out from his body). He claims he is the heir of Son Goku, “the mightiest in the universe!” Although, there are no more full blooded Saiyans other than Goku and Vegeta.

Goten is critically injured from Xicor’s attack. The result of his attack is felt in nearby cities (and bringing Tien and Chaotzu briefly out of retirement). Gohan feels the dangerous presence and flies in the direction of Goten’s fading lifeforce.

Xicor isn’t the only one interested in turning the Earth (for the 347th time) into a barren wasteland. A female alien who looks a lot like the Supreme Kai stands from afar, waiting for Xicor to finish the job.

Guess who comes to the aid of Gohan? Vegeta and Trunks! After submitting “WTF-is-going-on-here?” queries, the Supreme Kai lookalike introduces herself as Xicor’s mother; also revealing that Xicor is the son of Goku.

Why isn’t Son Goku there to put a stop to everything to [make the story interesting]? At the end of Dragonball GT, Son Goku leaves the Earth (or simply “dies”) in exchange of keeping the planet at peace. It seemed that when an evil presence is detected by the Z Fighters, it always centers around Goku. In AF, this theory is thrown out the window. 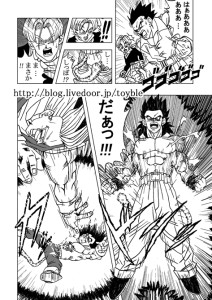 There are no more Golden Hair warriors: it’s all Super Saiyan 4 from here on out (or even in an online game, you would not want to use your weakest abilities against an End Game boss). Gohan goes SSJ 4 for the first time against Xicor. At this point, the both of them are equally matched like Goku would have been.

The fight scenes do not take forever like we’ve seen in the past: you could say it’s the same pace as Bleach, but NOT like Naruto in certain occasions. Dragonball AF is actually a lot better than the official cannon, but it’s probably because it’s hard to drag on fights that long in a manga…

Vegeta, with his infamous haircut and his sexy leather pants, and Trunks come to the rescue… Unlike in the Z story and in the Z Movies, they come a lot earlier (being a Vegeta fan, this drove me nuts that he does not appear sooner, blah, blah, blah). Of course, Vegeta questions Xicor’s existence-but not in the same fashion like in the Android Saga to Mirai Trunks: “Kakaratto and I are the only Saiya-jins left!”

Going a bit off-topic: There are a few things that made me squeal, as a fangirl-fan service wise-is the Vegeta, Gohan vs. Xicor fight: Both Gohan and Vegeta look too much alike… in before Widow’s Peak. Also, thinking back to GT, when Goku and Vegeta reverted from Super Saiyan 4, they appear in their original clothes. In AF, they are forever shirtless… until they find another shirt to put on.

Dragonball AF has been running since late 2008 and is over 170 pages long and counting! As of writing, it is at the end of the third chapter with a huge revelation coming up in the next chapter. There are many more surprises in store when you actually read AF: “what-if’s” stories come to life if Dragonball continued instead of Kai. 😉

It looks like AF will be around for a while… either until the artist calls it quits (which I hope doesn’t happen!) or until an official story comes to live. For more on the AF phenomenon, The Dragonball fansite Daizenshuu EX has an in-depth overview of the AF’s popularity with the Dragonball fanbase.

The original doujinshi can be read on Toyble’s Livedoor (in Japanese). An English and French translation is also available courtesy of DesireCampbell.com. The pages on Toyble’s site are released on a ever month-ish basis and translated as soon as it’s released.