I’ve been wanting to write about this for a long time. Since the majority of my posts focused on the bad and the ugly side of the fandom nearly two years ago, I wanted to wait a while until I did so I could get back to healthier topics. This is not about the anime fandom as a whole… maybe. It’s the fact that a tiny title name change upsets people when a franchise has two or more official titles.

This incident happened about several years ago when I went into a now-defunct Hollywood Video in a small suburb outside of Chicago, to ask about a certain foreign movie. At the time, I was on an Asian movie binge thanks to my mother who was in an Asian Films and Culture class at an adult college she attended. Watching the films she was recommended, I set foot on the Internet to find other movies not on her syllabus to personally watch. I found a Japanese movie that had an interesting plot: Suicide Club.

I had a few thoughts running through my mind, one being that the movie was so controversial in Japan, it was not ready for a local release. I asked anyway. Speaking to one of two clerks at the desk about Suicide Club, the other clerk entered the conversation and said:

“It’s Suicide Circle… and we don’t have that.”

So they don’t have it. Riiiiiight… First off, I was not asking him, but was asking the clerk waiting for me about it. Secondly, why so serious? Those who are probably thinking that he was joking, maybe he was. But you have to keep in mind the tone he said it in, looking at the formatting of the quote above. It did not sound like he was joking, and that he was sorting through the stack of movies like a robot, while listening in on our conversation. The clerk, a girl, joked with him, as if she found his correction a little much:“sounds like someone’s a movie buff.”

I should just drop it and forget about it. But remember that I have a problem with insincerity in people of certain fandoms. After the encounter, it was obvious that he was familiar with Asian movies, and probably a handful of anime series. That’s definitely not a bad thing since A LOT of us are into those too! But years later, meeting people that ended in unfortunate circumstances (see links above), you just can’t help but think “where did we go wrong?”

It turned out that the movie was not available on Region 1 DVD at the time. The only way I could have gotten it was through the awesomeness of YesAsia, but only on R2 and with no English subtitles. A few years later, the movie was FINALLY released on R1 from TLA Releasing.

And guess what the title on the cover says? 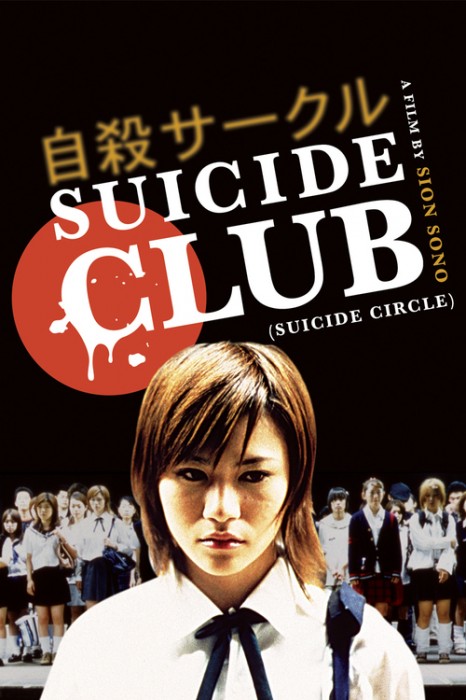 Both titles, Suicide Club AND Suicide Circle are on the cover! The movie officially has two titles.

Pardoning my rusty Japanese: “circle” in Kanji as 丸 (まる / maru)–translated as “circle” in English–it roughly means “club” in Japanese, as in a “Doujinshi Circle” (同人誌まる / doujinshi maru), or a group of independent manga artists. “Suicide Club” would make more sense, because the word “circle” is hardly used in the West.

With a title like “Suicide Circle”, it’s about a group of people joining together to commit suicide via an online message board, and the Japanese government is putting a stop to the trend. Kinda like Death Note with a dash of Battle Royale, right? Well, it doesn’t have anything to do with Death Note, nor it isn’t like it. That’s how I viewed the movie before I knew about Death Note–just another Japanese High School/Detective drama. There isn’t a mysterious diabetic detective in it, but it’s still an interesting movie. ^^

Now that we know the movie has two titles, it’s still the same movie. No need for hostility, people. 😀